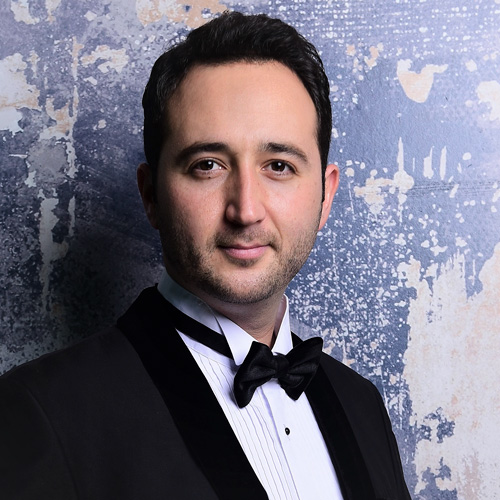 Baritone Doğukan Kuran is a member of the Young Artists’ Program, Junges Ensemble, at Dresden’s Semper Opera. His roles at this prestigious opera house include Fiorello in Il barbiere di Siviglia, Morales in Carmen and Kilian in Der Freischütz. He is also involved in numerous productions at the Semper 2 venue, including Aribert Reimann's Gespenstersonate and Peter Eötvös’ The Golden Dragon.

Doğukan Kuran graduated from the Curtis Institute of Music, Philadelphia, with a Master's Degree in Opera.

During his time at Curtis from 2014 to 2018 he had the opportunity to make several important role debuts. Under the baton of Karina Canellakis, he performed the role of Conte Almaviva in Le Nozze di Figaro at the Kimmel Center. He has also performed the title role in Eugene Onegin, Marcello in La Bohème, Tarquinius in The Rape of Lucretia, Jack Hubbard in Doctor Atomic, Olivier in Capriccio, Lescaut Massenet’s Manon, Germano in La scala di seta, and Ibn-Khakia in Iolanta. He studied with Marlena Malas and Luis Ledesma, and has also worked with Mikael Eliasen, director Paul Curran, and conductor Corrado Rovaris.

Praised for his intelligent musicianship and his warmth and charisma on the stage, he was an Emerging Artist at Opera Philadelphia during the 2017/2018 season, where he sang Le Dancaïre in a new production of Carmen and the role of the Doctor in the world premiere of in Orth's 10 Days in a Madhouse.

In 2017 Doğukan Kuran has participated in the Santa Fe Opera Festival and the Chautauqua Summer Music Program. He has also competed in several international competitions, winning 1st Prize at the Young Opera Soloists Competition in Turkey (2014), 2nd Prize at the Gerda Lissner International Vocal Competition (2016), and Grant Winner in the Licia Albanese-Puccini Foundation (2016).

Doğukan Kuran was born in Turkey and completed his vocal studies with M. Alper Kazancıoğlu in his hometown of Izmir.