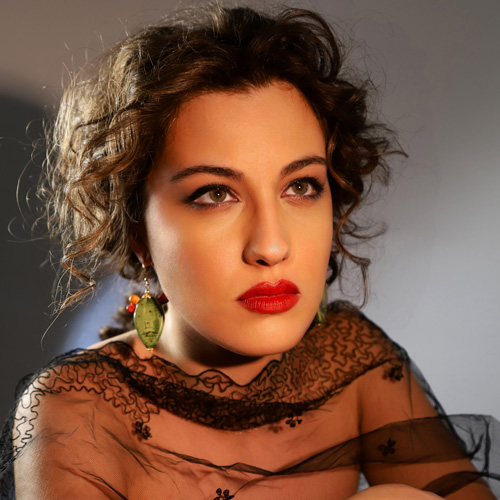 The 25-year-old Italian soprano Emanuela Sgarlata made her debut as Liù in Turandot at the Puccini Festival in Torre del Lago in summer 2021 to overwhelmingly positive critical acclaim.
For instance:
“The quality of the very young Emanuela Sgarlata is impressive, so at ease on stage while being also vocally perfect. With great attention to detail, she has given us an honest Liù, free of the portamentos and redundancies of the worst tradition, making it all the more effective.”
“In the cast the heartfelt Liù by Emanuela Sgarlata stands out. The young soprano, supported by a touching presentation, shows off a voice full of warmth and colors. In “Tu che di gel sei cinta”, it reflects all the pathos that stirs Liù in the face of her farewell from life.”

Also in the summer of 2022, Emanuela Sgarlata sang Liù in Torre del Lago.

Emanuela Sgarlata made her stage debut in 2017 at the Teatro Lirico Sperimentale in Spoleto as Micaela in Carmen. In addition to engagements at various theatres in the Sicilian province, she has already performed as Serpina in La serva padrona and Bettina in Il duello comico by Paisiello at the Teatro Massimo Palermo, as Clorinda in La Cenerentola in Cascia and Norcia and at the Teatro Cavallerizza Reggio Emilia in the role of La natura in the world premiere of Filippo Perocco's Lontano da qui. Also at the Teatro Massimo Palermo in 2018 she sang the Paggio in Rigoletto alongside Leo Nucci. In November 2020 she sang her first Musetta at the Associazione Musicale Tito Gobbi in Rome.

Her other commitments include a concert at the Italian embassy in Berlin on the occasion of the Day of the Republic. In October and November 2019, she sang for the Teatro Massimo Palermo at the Tourism Expo in Japan and London.

Emanuela Sgarlata began her vocal studies at the age of 16 with Marcello Pace in Catania and is currently a student of soprano Laura Giordano.

At the As.Li.Co. singing competition in 2017, she reached the semifinals. In the same year, winning the 71st Concorso Comunità Europea per Giovani Cantanti Lirici in Spoleto enabled her to take part in the biennial course for professional development at the Teatro Lirico Sperimentale and to sing at events and concerts in Umbria. In August 2019 she participated in singing courses and master classes at the Academy of the Maggio Musicale Fiorentino. She was awarded as Eccellenza Iblea for the Ibla Classica International at Teatro di Donnafugata in Ragusa. In 2021 she was granted the 2nd Prize in the Concorso Lirico Virtuale Fiorenza Cedolins.

Emanuela Sgarlata was born in Ragusa, Sicily, in 1997.